The early years of the band as related to us by Dai Miles, a member of the original Band. 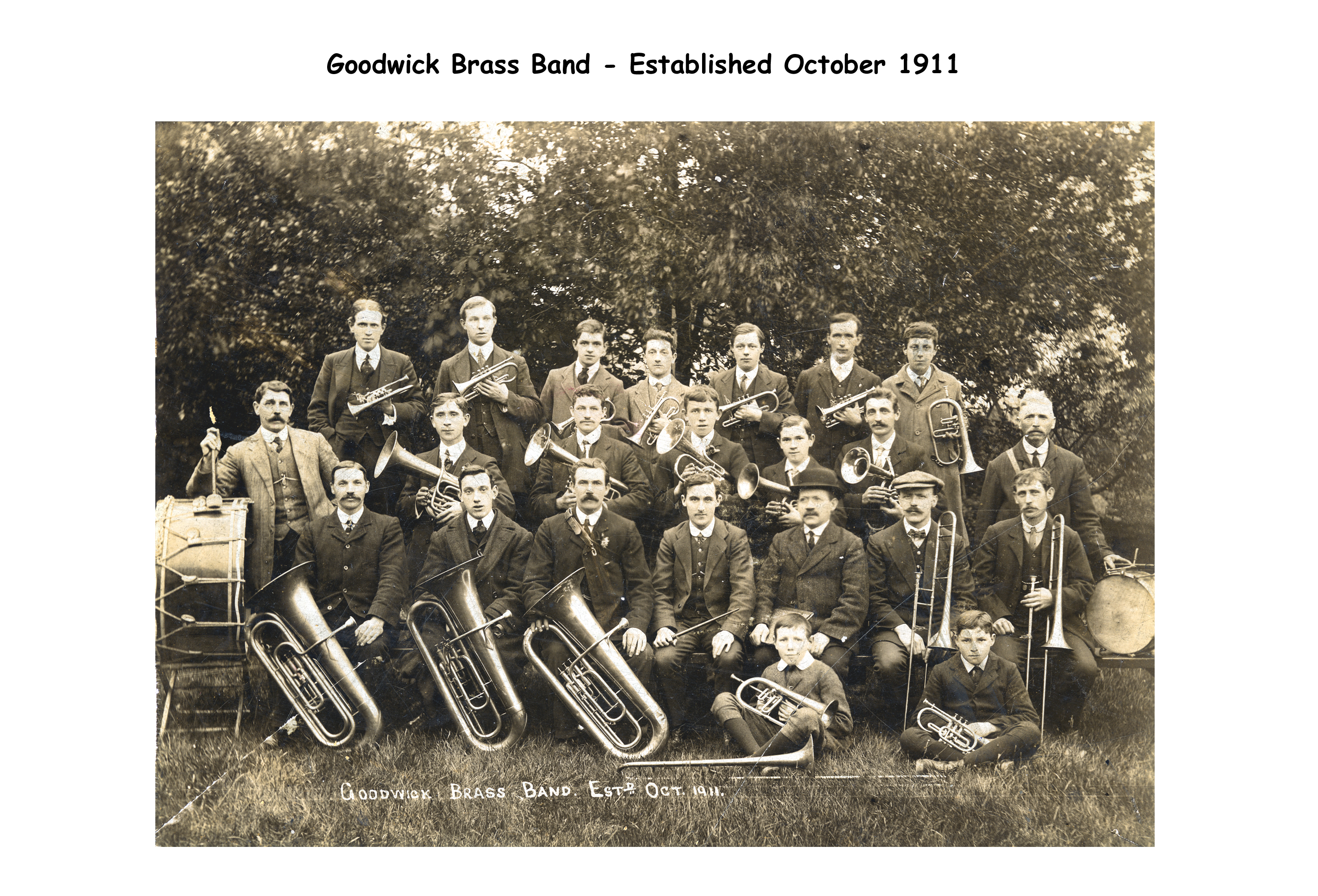 Once upon a time, at the turn of the 20th century, in a small community in West Wales called Goodwick, there was a brass band. This group of stalwarts, many of whom had come to the area from Neyland when the Harbour was built, was in the charge of Mr Lake, the headmaster of the local school. Mr Lake and his brother worked in Emlyn Colliery in Ammanford and he played solo cornet in the Colliery Band. He first came here to work in Puncheston School and then became headmaster of the newly built Goodwick School and either took over, or formed the Band. Practices were held in a corrugated zinc hut at the old laundry cottages (long since gone) in Dyffryn . There was no electricity then and the hut was lit by oil lamps on the walls. If the practice was really good the flames would shoot up high and the euphoniums could easily put all the lamps out! Sometimes they used battery lamps but they cost 4s. 6d. each and 4d. for the batteries so there wasn't too much practice in winter!

Mr Lake was a hard taskmaster and he would continually admonish them - "you play like a circus band"! The instruments were old, needed new corks, and "clicked" as they were played. "You're banging your instruments against your buttons again!" - a reference to their uniform, which was the G.W.R. jacket and a white paper band put round the hat.

Put your instruments in the car and come with me...

In 1914, when War broke out, the Band held a meeting and decided that those of the right age should join up as a Band. They did this and from Kinwell Park in North Wales they were transferred to France, back from the Front Line, where they were used as escorts. One particular day, it seems, they were having a quiet smoke between duties, when an open car came along with an officer and his driver. "Put your instruments in the car and come with me" the officer said. He gave them each a rifle and marched them away. They were scattered then to different regiments.

At home the members left behind continued the practices and the Band re-formed after the War. 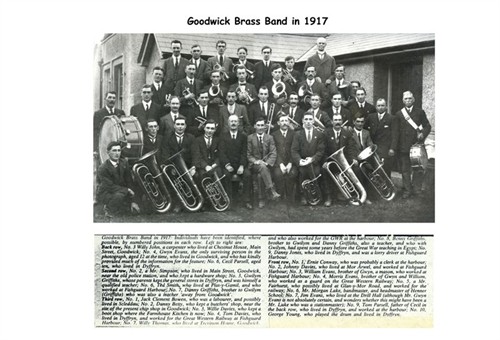 One more piece and give it some drum!

Dai Miles, an old Band member, the source of all these tales, joined the Band in the 1920's and bought his cornet in a pawn shop in Bute Street, Cardiff for £1. Billy Jeff and Jack Evans did the repair work on the instruments.

Vincent Johns was President of the Band. At Christmastime the Bandsmen would love to play outside his house. They would have beer brought out to them whilst Mr Lake would be invited in for a swig of something stronger. Vincent Johns would give £1 or £2 for the Band and would then ask them to play "one more piece and give it some drum"!

The Band played everywhere. There were lots of sports and carnivals and there were ox roasts in the football field. One year at the ox roasting, they were raising money for St. Mary's Church Hall, which was being built then and they were paid £24.0.0. Then they played at Lower Town Carnival and Sports and were paid £24.0.0 for that as well! There used to be Carnival and Sports at the top of Stop and Call Hill. The Band would form by the Cunard (the fish & chip shop now) and would march up the hill, and then, despite exhausted lungs, would play for a while at the top.

John Clement Bowen played the big drum for a bit. But he wasn't very tall and couldn't see over the top too well. One day they were leading the Carnival up Cambria Square to play there for a while, but John Clement Bowen went down Main Street instead, beating the drum as he went and someone had to run after him and haul him back.

Their favourite march was the "Washington Greys" and they knew "The Chieftain" so well they could nearly play it without music! In fact, that was the piece they played the last time they ever marched in Goodwick - and also the piece the present Band played the first time they marched through Goodwick. They were great on dance music. They played waltzes, foxtrots, you name it, for the dances in the drill hall and the dances held on the green by the tennis courts on the Parrog on summer evenings.

In 1935 they were practising day and night to get ready for the National Eisteddfod that was coming to Fishguard in 1936. They were to lead the Bards and Druids and Danny Jones, a cornet player, was to play the long trumpet. The snag was, he had to ride a horse whilst playing the trumpet. Llewellyn, the Grocer's horse - of a fearsome reputation - was elected to be the trusty steed! Danny Jones, clad in a green suit and boots and blowing the long trumpet, could not ride a horse and so was very frightened, Lewis Rennish who was leading the horse, in spite of a wide vocabulary and a big stick, could not control the poor terrified creature.

The reason why the Band disbanded soon after this is not clear.

Half a century later, new beginnings...

Once upon a much later time there was a family get-together on a farm in Crymych, There were many members of John Evans' family round that table, Christmas 1986. The home brew was potent that year and conviviality reigned. The talk flowed over times past, as is often the case, and turned inevitably to the revival of the old Goodwick Band, a seed germinating in John's mind for many a year - his Father had been a tenor horn player in the Band - But the pressures of farming had put these thoughts on the back burner. A liquid hour later, "you're not milking any more so why not start one now" says brother Ronald. "Where" says John? "You can use our front room," says Penny (Ronald's wife) And so it came to pass. 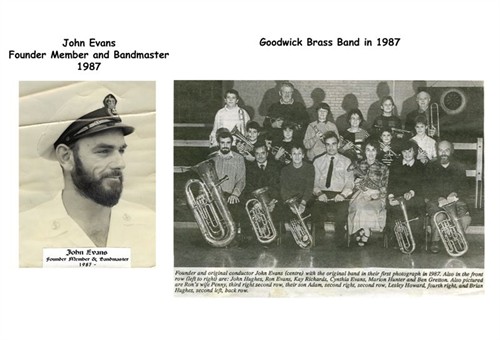 Every Good Boy Does Farts

The following Friday and we sat round in a circle whilst John distributed an instrument (the few remaining from the Old Band), to each of us, eight of us in total and said, "now blow"! The noise was horrendous and we collapsed with laughter. John was armed with a large piece of hardboard chalked with staff lines and notes, propped on the mantelpiece, and also, dangerously, a knitting needle as a baton. Many was the time in the weeks to come we threatened to smother that needle with knitting! F A C E was fair enough but E G B D F translated into Every Good Boy Does Farts as a memory jog for the younger members had soon to be turned to Every Good Boy Doesnot Fart. After the practice we would feed on lip tingling tea and goodies.

We persevered and soon were playing simple tunes from the Tune a Day book.

We now needed to raise funds and so we held a public meeting in the Community Centre, selected a Committee and were officially "launched". We received overwhelming support and donations from the Town Council, Fishguard Fruit and other businesses, and from Mr Schell of The Fishguard Bay Hotel who also offered us the use of a room in the Hotel for a weekly practice. In the months that followed, the Band practised in church and chapel halls and vestries, in luxury in the Bay Hotel and in the Goodwick Community Centre.

From the very beginning we had received support from Don Frankham, the Conductor of Shirrell Heath Band in Hampshire, one of the Bands that John and his children had played in before moving back to Wales. He was our mentor. He visited and helped and was the source of our supply of instruments. There was a lot of journeying back and fore and we are eternally grateful to him.

In order to raise funds, we decided to hold a cheese and wine party on the 5th December 1987. This was held in the Further Education Centre in Fishguard. The newly formed Supporters Club supplied the food and there was a large audience of 150 people or more, including the Mayor and Mayoress. Our repertoire consisted of simple pieces from our early learning books, (the two liners repeated several times) and we had a standing ovation! We were soon playing in various Chapels and Churches and at Carnivals and Fetes throughout the area.

From the very beginning, during the early days of practising in Penny & Ronald's front room, musical scales and exercises had been floating across from Ireland, the result of contacts with the Loch Garman Silver Band, brought about by connections with staff working on the ferries. Soon a delegation from Goodwick Brass Band went to visit a delegation from the Loch Garman Band and a link was established. 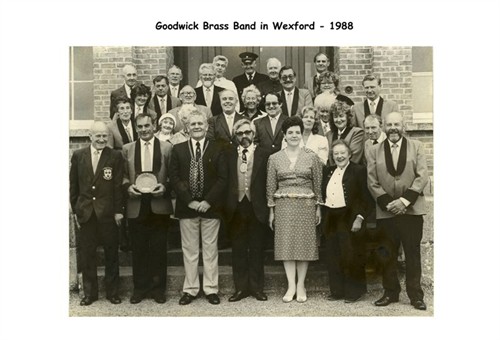 In July 1989, Goodwick Brass Band hosted a weekend visit from Loch Garman Band who gave a concert in the Bay Hotel and the following year Goodwick Brass Band visited Ireland. This was to be the first of many exchanges; the last visit was September of last year when the Band gave a joint concert with Loch Garman Silver Band in Wexford. They will be visiting Goodwick in August of this year.

All of the equipment in these early years was carried around in car boots and we were in dire need of permanent quarters. Adam, Ronald and Penny's son, sent a letter to Mr Sherwood of Sealink pleading our cause and asking if we could possibly use the Old Institute (our present quarters, which are the old reading rooms of the Great Western Railway in the area). Sealink were sympathetic and in 1991 we were able to move in armed with large paintbrushes and a great deal of enthusiasm and excitement.

John Evans conducted the band between 1987- 1989 and since then the band has grown from strength to strength.

Gaining widespread recognition in both the concert and contesting arenas the band has progressively climbed through the ranks, having started in the 4th section all those years ago almost thirty years later it has established itself as a championship section band.

Along the way there have been a number of musical directors that have helped the band grow to what is today:

The band continues to thrive under our current musical director Matthew Jenkins, as well as a senior band it also has a strong contingent in both youth and community bands which helps ensure the continued success of the band. Altogether the total membership of the combined bands is approximately a hundred members.

The band plays in numerous events over the year, to experience the sounds of Goodwick Brass in concert please visit our events page.